The upcoming weekend will count 52 weeks (1 year) from the uprising of the Yellow Vests movement. In the meantime, from yesterday until Sunday, the Yellow Vests’ 4th assembly of assemblies will be taking place in the city of Montpellier. Although the amount of protesters on the streets has decreased, the movement is increasingly rooting itself into the paradigm of democratic confederalism.

For more than two centuries, France has been the classic model for social innovation, and the unique, social movement of the Yellow Vests has enormous international significance.

Their uprising has unmasked the lies and violence of republican government, as well as the duplicity of representative institutions like political parties, bureaucratic unions and the mainstream media.

The Yellow Vests represent the first time in history that a spontaneous, self-organized social movement has retained its autonomy, resisted cooptation, bureaucratization and sectarian splits. They pose a real, human alternative to the dehumanization of society under the rule of the capitalist “market.”

One year ago, the Yellow Vests burst literally “out of nowhere,” with autonomous local units springing up all over France like mushrooms, demonstrating on traffic circles (roundabouts) and toll-gates, marching every Saturday in cities. But unlike all previous revolts, it was not Paris-centered. In real life the Yellow Vests are largely low-income, middle-aged folks with families from the provinces whose trade-mark is friendliness and improvised barbecues.

Tired of being lied to, cheated, manipulated and despised, the Yellow Vests instinctively rejected being instrumentalized by corrupt “representative” institutions – including political parties, union bureaucracies and the media. They eschewed “leaders” and spokespeople even among their own ranks, and are only now gradually learning to federate themselves and negotiate with other social movements.

From the very beginning, the Yellow Vests’ non-violent unauthorized gatherings were met by massive police repression along with a new “anti-vandalism” law making it virtually impossible to demonstrate legally. The media concentrates on sensational images of the violence (to property) of the Black Block vandals at the fringes of Yellow Vest demonstrations, never on the human victims of systematic government violence. A popular slogan proclaimed in Magic Marker on a demonstrator’s Yellow Vest reads: “Wake up! Turn off your TV! Join us!”

Small wonder that, subjected to increasing violence and continuous slander, the numbers of Yellow Vest protestors has diminished but they are still out there and their favorite chant goes: “Here we are! Here we are! What if Macron doesn’t like it? Here we are!”.

The crisis in France is far from over. If and when the other oppressed and angry groups in France – the organized workers, ecologists, North African immigrants, students struggling against Macron’s educational “reforms” – also turn off their TV’s and go down into the streets, things could change radically. 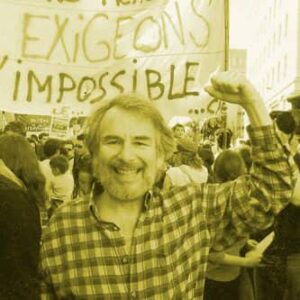 Richard Greeman is a retired professor and author, was a colleague of Cornelius Castoriadis, Raya Dunayevskaya and Immanuel Wallerstein, and is a prolific translator of the anti-authoritarian Russian revolutionary Victor Serge. Richard is a founder of the Praxis Research and Education Center, based in Moscow, and director of the Victor Serge Foundation.

Share this ArticleLike this article? Email it to a friend!
Email sent!